An Insight View of Satellite TV and Dish Network 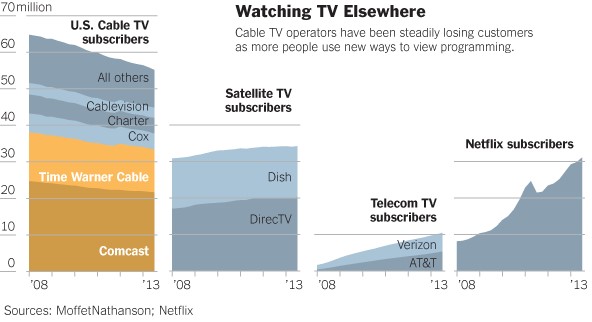 Who can forget the first ever live transmission of a boxing championship match between Mohammad Ali and Joe Frazier which was telecasted live in October 1975. This was the very first attempt to use satellite for displaying a live match to cable TV. Since then the journey of using satellite TV network has not stopped which kept on modifying after time to time. From Community Access Television CATV, which used to run through a single antenna in the remote areas. Later advancement in satellite technology added more innovations to these network programs. As the cable content was transmitted though satellite not encrypted, there was an issue with the security of these transmissions. Anyone equipped with a receiver could catch the programs which gave birth to the law that satellite transmission should be made encrypted.

Satellite TV industry enjoyed a solo position for almost ten years from 1985 to 1995 but sooner the heavy costs pf dish antenna fees and its decoding fees made users fed up of dish antenna transmission and that gave birth to Direct TV Satellite System. Primestar and Direct TV system wee run through a small sized dish technology and video and audio programs were transmitted to the users through these. The American 21 st century lifestyle now revolves around these geosynchronous satellite system that brought lots of perks to the television freaks.

With the advent of satellite transmission in daily life, the DTH Satellite television introduced four commercially available satellite TV technologies that are mentioned below;

With its advent in 1976, this industry started serving viewers with the 1 st home-made satellite system and up till now C-Band is successful in presenting 250 video channels and 75 audio services to approximate more than 335,000 subscribers. All transmission is done through huge dish of 7 feet diameter.

The Ku-Band services are provided through DIRECTTV, DISH and GlobeCast World TV. The dish size now reduced to 18 inches only while the transmission upgraded to top levels. These small sized dish were easy to install at any premises and offer more than 200 channels to the users. The picture quality and sound also raised to higher extents and now they have started to present local programming as well to approximate 150 markets.

Ka-Band is used by DIRECTTV and WILDBLUE where these frequencies transmit high definition programs and broadband services to the subscribers. The frequency levels here are between 18.3-18.8 +19.7 – 20.2 GHz.

There are three major companies that provide internet broadband services through satellite and these are WILDBLUE, Hughes Network System and STARBAND. Internet broadband via satellite can be run through single satellite dish which offers higher connectivity ratio as compared to DSL and cable modems. The transmission provided through these runs smoothly without any interruption or slow-downs and gives subscribers a top notch quality experience.

For all those freaky TV viewers it becomes a challenge to choose between the two titans of satellite TV as the viewers are always crazy to get uninterrupted transmission with high speed internet network. Here is a small but informative guide for the TV viewers which will make their selection simpler. Basically there are three specific factors that can judge the worth of both satellite TV and these are;

As far as content is concerned, the programs offered by Dish and Direct TV are quite same but the difference lies when we talk about the services they offer in form of channels. Dish industry wins the game if we talk about the sports channels because they provide a long list of authentic sports channels as compared to DirectTV. The languages launch of Dish network is also vast than DirectTV as dish supports 29 different languages while Direct TV supports eight language options. However Direct TV wins the battle when we talk about NFL Sunday Ticket support so the viewers who need more content go towards Direct TV. 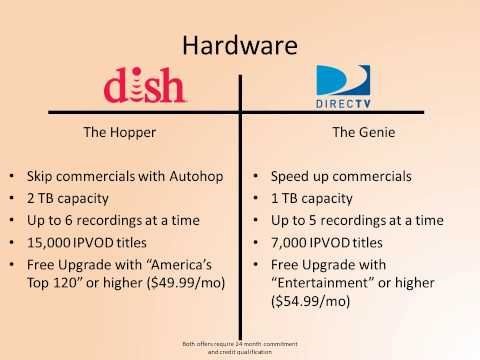 Recording capacity is the basic difference between both networks, the Hopper and Genie. Viewers have to pay for these storage capacity offered and other services as Dish Hopper 3 offers up to 500 hours of HD content and 2000 hours of SD content for some fee. We can say that Dish offers double the storage capacity as compared to Direct TV network. Features offered by both systems is also different in terms of apps and voice control. 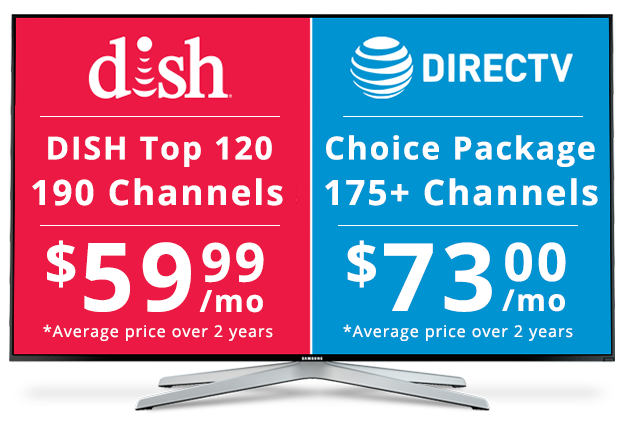 Competitive Advantages of Dish over Satellite

Dish industry beats other satellite TV providers in many aspects and among these the biggest factor is its pricing strategy. Dish TV offers multiple pricing packages to its users hence making Dish network a better and affordable choice for the TV viewers.

When it comes to technology introduction and innovative offers, Dish again succeeds o maintain high quality standards and wins the competition again. Hopper 3 is the best example of technology and innovation introduced by Dish that offers 500 hours of HD video storage. Dish network is free from any kind of wiring hassle and you do not have to scramble our walls with cable wiring throughout your home. Dish offers a neat wireless Joey transmitted network that is much liked by the viewers as compared to Direct TV.

Introduction of built-in Netflix and YouTube support is another interesting feature of Dish industry that makes it stand out of any kind of competition. Offline downloads opportunity and lot of other perks of Dish TV make it the first priority of crazy TV lovers.